T.S. HENRI MOVING THRU CONNECTICUT AT THIS TIME…TROPICAL STORM WARNINGS REMAIN IN EFFECT FOR THE ENTIRE STATE…FLOOD WARNINGS CONTINUE TO BE ISSUED AS HEAVY RAIN CONTINUES TO FALL ACROSS THE STATE…

At 2:00 PM the center of Tropical Storm Henri was located approximately 5 miles east of Westerly, Rhode Island.  Henri is moving to the northwest at 9 MPH with maximum sustained winds of 50 MPH.

At 2:00 PM radar showed bands of very heavy rain from Tropical Storm Henri continuing to move across the state from southeast to northwest.  Northeast winds are currently gusting to 35 – 55 MPH across most of the state.   Eversource and UI are currently reporting a total of 30,874 customers without power across the state mainly in eastern CT.

The stronger winds aloft with Henri did not mix down to ground level as they did in Isaias.  This was mainly due to a lack of convection (thunderstorm activity) with Henri.  Also, the strongest winds occurred in southern Rhode Island to the right of the storm track as Henri made landfall and quickly subsided as the eye moved into Connecticut.

Moderate River and Major Urban Flooding Expected: Henri is forecast to bring 4” – 8” of rainfall to most of the state.  Flood Warnings and Flash Flood Warnings are currently being issued for southern CT.  This heavy rainfall will likely cause moderate to major urban flooding and moderate river and stream flooding lasting into late this evening.

Moderate Tree and Powerline Damage Expected: Winds may gust to 30 – 50 MPH at times for the next several hours.  These wind gusts will cause some additional power outages.

The Department of Emergency Services and Public Protection, Division of Emergency Management and Homeland Security will continue to closely monitor the track of T.S. Henri. 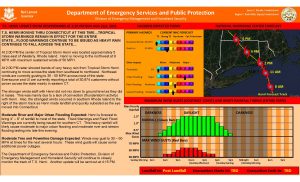